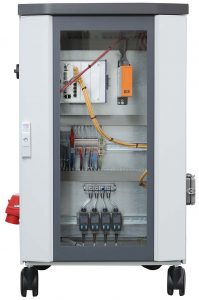 An efficient and flexible INFRASTRUCTURE is required if we want to combine manufacturer independent production stations and create a production process with a minimum of configuration effort.

That is why the infrastructure of the Industrie 4.0 production plant was given a new scalable, star-shaped design concept this year. The infrastructure nodes support independent production cells consisting of several stations. The computing power provided by edge devices in these nodes is now available for industrial intelligence applications. This solution illustrates the next step towards the practical introduction of a standardized module interface. The production plant can now be quickly and flexibly reconfigured. In addition, a tablet display at the nodes enables a near real-time visualization of the captured process data. Another feature of the new infrastructure nodes is the real-time data transmission over the TSN network technology (Time-Sensitive Networking). Data is now prioritized using TSN. Through this prioritization process, flexible decision-making is possible about what data must be immediately available and where delayed transmissions are acceptable. TSN guarantees, for example, that critical safety data will be sent with the highest priority and will arrive even if the network is heavily loaded. This ensures that even in an overloaded network, reliable processing continues at that module. The new infrastructure nodes were successfully developed in cooperation with our partners B&R, Huawei, Phoenix Contact, Bosch Rexroth, and Weidmüller.