Do you want to find out more about our whitepaper? Here you can find our current version to download in PDF format. 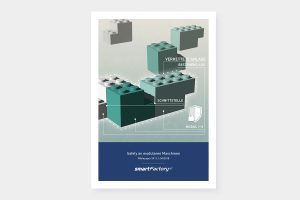 The SmartFactoryKL Working Group 1 “Smart Infrastructure” addresses the topic of safety in modular Industrie 4.0 production plants. Expanding on the improvements of the Whitepaper for the Hannover Messe 2018, the existing concept of safety inspection of module machines is upgraded by several levels. The goal is to define and use application-dependent certified software to demonstrate how the complexity of linked interfaces can be reduced to manageable levels.

Working group 1 “Smart Infrastructure“ of SmartFactoryKL deals with the topic of safety in modular industry 4.0 production facilities.
The aim is a plant structure that enables flexibility and changeability, e.g. through modularisation. Intrinsically safe modules are equipped with conventional, functional safety. However, there are still dependencies between the modules. A new safety architecture is required in modular systems that also support unknown modules. 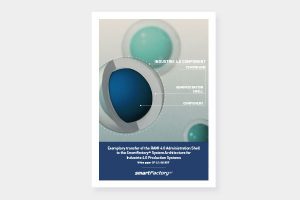 Exemplary transfer of the „RAMI 4.0 Verwaltungsschale“ on the SmartFactoryKL system architecture for Industrie 4.0 production plants

The Digital Factory Working Group is creating a digital representation derived from the Industrie 4.0 production plant found in the SmartFactoryKL system architecture. SmartFactoryKL specifically references the so called “administration shell” of the Plattform Industrie 4.0. On the basis of existing standards with relevant objects and instance data from the engineering process, very diverse objects including the manufacturer-independent production modules are provided, enriched, managed, and used in concrete applications, for example, in the (re-) engineering of scalable production. 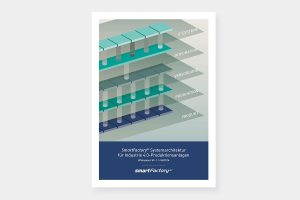 The system architecture for the Industrie 4.0 production plant (I4.0 plant) serves as a model technology solution that assists users in making customized products and provides long-term flexibility at discrete, automated assembly production facilities. The system architecture specifies interfaces and describes, from a mechanical, electrical and information systems point of view, an approach to the modularization of I4.0 systems that makes vendor-independent implementation possible. The system architecture enhances the findings of the previous white paper by exploring new areas and expanding on others such as the role of logistics and modularization within the production module. The practical implementation has been successfully tested by SmartFactoryKL and its partners.

All contents of this website, especially texts, photos and graphics are copyrighted material. The copyright is held by SmartFactoryKL. The material underlies the restricted right of use and is only allowed to be used with reference and/or link to SmartFactoryKL e.V.

Media data which are available for download in press area of our website, can be used in electronic or printed publications by displaying a reference to SmartFactoryKL.