A dynamic safety concept has been implemented in the Industrie 4.0 demo production plant of SmartFactoryKL consortium on the basis of an industrial, Ethernet-based communications protocol. This new feature allows for an emergency stop function to be implemented flexibly for the first time at the individual production cells, eliminating the need to parameterize the entire system. This newly won flexibility provides several advantages. The advanced Industrie 4.0 demo plant will be presented by the Technologie-Initiative SmartFactory KL e.V. in cooperation with the German Research Center for Artificial Intelligence (DFKI) and 18 partner companies at the Hannover Messe from April 24 to 28, 2017, in Hall 8, Booth D 20.

This year, the SmartFactoryKL partner network is introducing an expanded demonstration production plant system with a new layout: The modules are no longer set up in one line, but instead spread out over three manufacturing cells: two automated cells and one manual work station. Thanks to the flexible transport system, different paths can be taken to produce the demo product, in this case, a customized business card holder.

The flexible plant setup creates new possibilities for a modular, dynamic safety concept. The arrangement of the production cells with minimum physical separation results in several independent emergency stop domains. If one cell switches to a safe state, the rest of the system can continue production. The effect is a significant reduction in production delays and thus a big advantage in real operations.

Seven companies in the SmartFactoryKL network have developed the new safety concept using an industrial, Ethernet-based communications protocol. This involved the integration of a central safety control unit built into the server track; also, all system components are equipped with small I/O units which exchange signals about the functional safety of the production modules.

The modules or manufacturing cells are parameterized dynamically by means of the communications protocol, so that while some system components fail in the event of an emergency stop, the entire system is not brought to a standstill. “Thanks to this setup, valuable time is saved in production operations. Our partner network is presenting an intelligent solution to a real problem in manufacturing and has implemented it successfully in our demo system,” Professor Dr. Detlef Zühlke, Chairman of the Board of Technologie-Initiative SmartFactory KL e.V. and Director of the Research Department “Innovative Factory Systems” at the German Research Center for Artificial Intelligence, explains.

Greater flexibility thanks to modular certification

In terms of Industrie 4.0, increased manufacturing flexibility means that systems often have to be rearranged, and that calls for re-certification. Thanks to the dynamic safety system, the new certification procedure by independent accreditation authorities is made simpler. Such a system enables a simplified, partially or fully automated certification procedure whenever systems are extended or modified.

In the past, all production modules of the demonstrator were connected in one single emergency stop loop. The conventional wiring method leads to high cabling expense whenever new production cells are added. In addition, it severely limits the amount of transferable data and it is rather difficult to identify the cause of an emergency stop event. Thanks to the new, dynamic safety design, these disadvantages are eliminated. 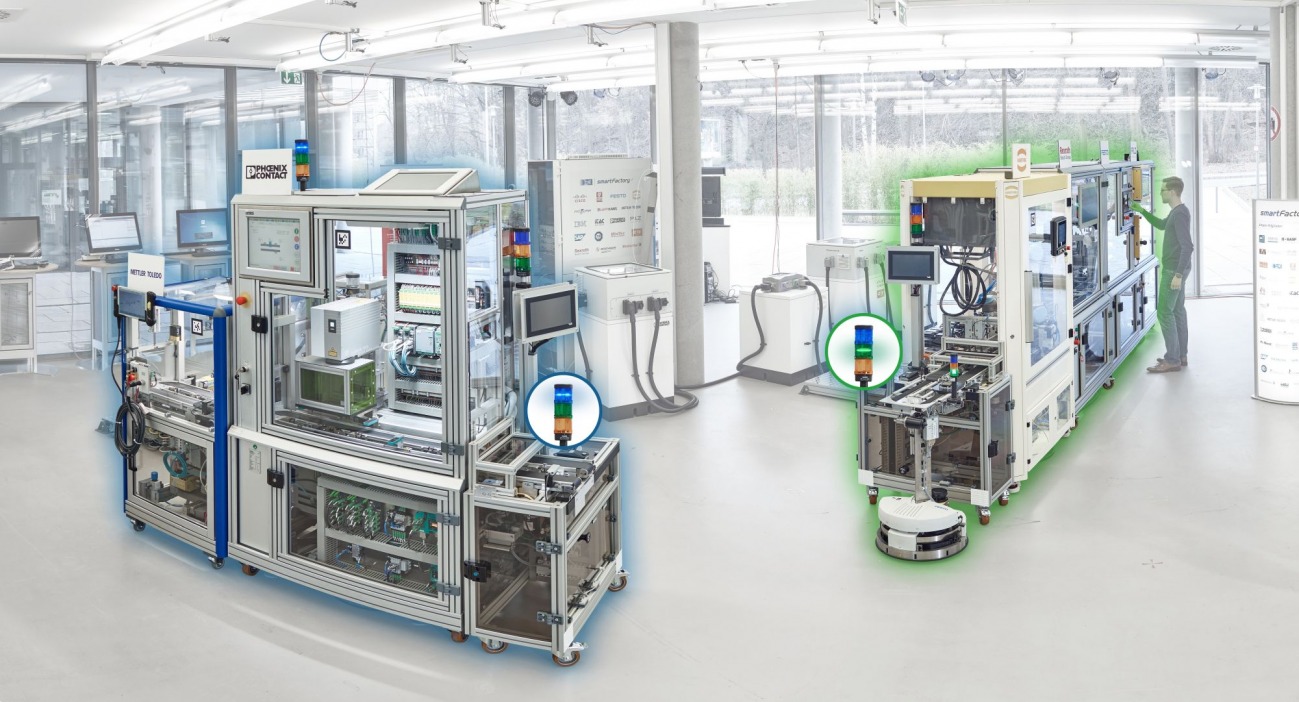