The Industrie 4.0 production plant on display by the SmartFactoryKL partner consortium shows a manual workstation with improved Human-Machine Interaction at the Hannover Messe 2017. This interaction is achieved with an IT structure more closely integrated with the production plant. Furthermore, the manual workstation features an assistance system with intuitive controls. The Technologie-Initiative SmartFactory KL e.V. and the German Research Center for Artificial Intelligence (DFKI) will present this advanced development project in cooperation with 18 contributing partner companies at the Hannover Messe from April 24 to 28, 2017, in Hall 8 / Booth D20.

An operator at the manual workstation receives order summaries on a display with an easy-to-operate user interface (UI). The UI has been redesigned to enable the “docking” of the AGV to the manual workstation. The operator confirms delivery of a product from the AGV and can even request a product from the AGV on the UI. This enables the operator to actively influence the processing order. The new design provides the great benefit of a flexible and requirements-based production: fully automated, semi-automated/partially manual, or fully manual.

Various parts for the customized business card holder, such as the different covers or clips, are stored in assigned containers at the manual workstation, where the operator picks and assembles them into the individual product. The container system is mounted on load cells equipped with a cyber-physical system (CPS) that automatically calculates the current fill level of each container based on weight. The data generated in this way, for example, facilitates inventory warehousing or can give evidence of wrong material use or even theft. Additionally, each container is outfitted with an RFID chip for identification.

In the next development step of the manual workstation, the “Plug & Play” concept will be implemented on the load cell level. Thus, when a container is placed on the load cell, the system will automatically recognize it thanks to its RFID chip and adjust the production process accordingly.

“Successful Human-Machine Interaction reflects the basic concepts of Industrie 4.0: flexible, fast, and simple adjustment of the production plant to quickly accommodate individual customer requirements,” said Professor Dr.-Ing. Detlef Zuehlke, Chairman of the Board of Management of SmartFactoryKL and Director of the Research Department Innovative Factory Systems at DFKI. 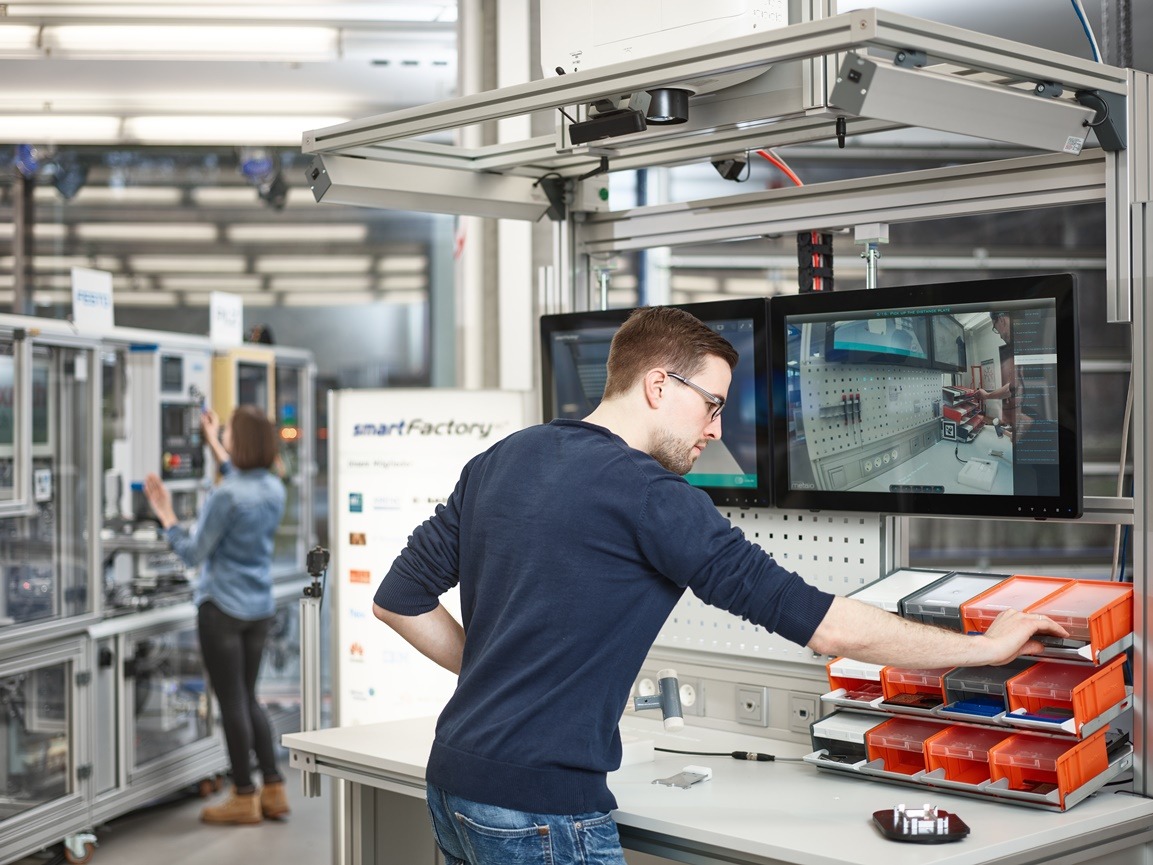