High-level representatives of the SmartFactoryKL members attended a meeting around the new vision “SmartFactoryKL 2025″ at the Hannover Messe.

SmartFactoryKL achieved great success in 2014 as the world’s first manufacturer-independent Industrie 4.0 production plant. Since then, the concept of Industrie 4.0 has continuously evolved. Now it is time to define a new vision to shape the next evolutionary step for the factory of the future.

The theme of the vision is „autonomous production“. It is the key to the future, since it is the only way to master the increasingly complex production processes and enable the resilient and efficient production required especially for small batch sizes. The necessary integration of automation, IT and people is one of the core strengths of SmartFactoryKL. In particular, the development of the key technology Artificial Intelligence in the coming years will facilitate the implementation of autonomous production. 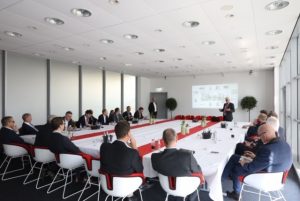 The goal is to realize an industry-compatible, autonomous production plant by the year 2025. Therefore the research experience of DFKI is combined with the concrete industry issues of our members. At the Hannover Messe 2020, a new production plant will be presented.