The partner consortium of the SmartFactoryKL Industrie 4.0 production plant demonstrates how to implement artificial intelligence (AI) as a partner for people in an Industrie 4.0 environment at the Hannover Messe from April 23-27, 2018. Three scenarios are introduced that can be efficiently realized only by using AI and augmented reality (AR): Predictive maintenance, remote servicing, and knowledge management. In all cases, huge data volumes are quickly and reliably captured, evaluated, and provided to people in a filtered, appropriate format – a feat that humans are unable to perform without technical assistance. The joint exhibit stand of SmartFactoryKL and the German Research Center for Artificial Intelligence (DFKI) is located in Hall 8, Stand D18.

Before AI can be used effectively in production, data must first be collected. The data refers to machine data such as pressure, temperature, flow rate, vibration, etc. required, for example, to perform condition monitoring. The data volume generated by sensors and edge devices is too large to be quickly evaluated and interpreted by purely human abilities. Only when the recorded data is processed in the cloud by the appropriate methods of data analytics and the result is returned to the plant operator can the benefits be seen and, for example, a looming machine failure can be prevented. This failure can be remedied in advance by predictive maintenance, which in turn, minimizes repair times and plant downtime.

The partner consortium of the SmartFactoryKL Industrie 4.0 production plant shows this “Predictive Maintenance” use case at Hannover Messe. AR promises to guide workers on the scene through the required maintenance procedures. The use of data glasses, for example, is a tested and reliable aid: information and work instructions are projected into the worker’s glasses, freeing both hands to carry out the required tasks. The result is a more intuitive and improved fault resolution. Remote maintenance is also simplified by the use of AI, for example, by enabling an engineer from the office to directly support technicians in the field.

“The predictive maintenance use case shows how the vertical integration of work units can function smoothly in both directions. Not only is data sent from the machines to the cloud, but the evaluated results are returned to the shop floor. Based on this decision making aid, the human still has the job of interpreting the information and initiating the proper work activities,” said Prof. Dr. Martin Ruskowski, Head of Innovative Factory Systems Research Department at DFKI and an expert in the field of AI in production.

The use of artificial intelligence is also beneficial in passing on the valuable know-how of older employees to younger colleagues. In the factories of the future, the experienced employee will be able to record important steps in the setup, operation, or repair of installed units with the help of cameras. The inexperienced employee then uses the data glasses to access AI tools for image recognition. The right work instructions are displayed in the data glasses with the help of augmented reality and the worker can perform the tasks more efficiently.

“AI systems can provide context-sensitive information, analyze motion sequences, verify the result of specific motion sequences, and reduce the need for human input during the production process. We see great potential in AI-based applications, especially, in the area of knowledge management,” explained Ruskowski.

Another AI possibility is the “speech-to-text” application. Such applications translate voice commands from the employee into writing, enabling information searches in a database. For example, from all the technical system documentation, an employee can display the currently required passage of the operating or assembly manual in the data glasses. The annoying search through file folders or large computer text files is over. This use case is also demonstrated by the SmartFactoryKL partner consortium at Hannover Messe.

“By expanding human capabilities and using new, AI-based interfaces, we are advancing the thinking on automation processes and better integrating people in the complex processes. The aim is to stop adapting humans to machines. Instead, automation is adapted to people and the machines become useful companions,” concludes Ruskowski. 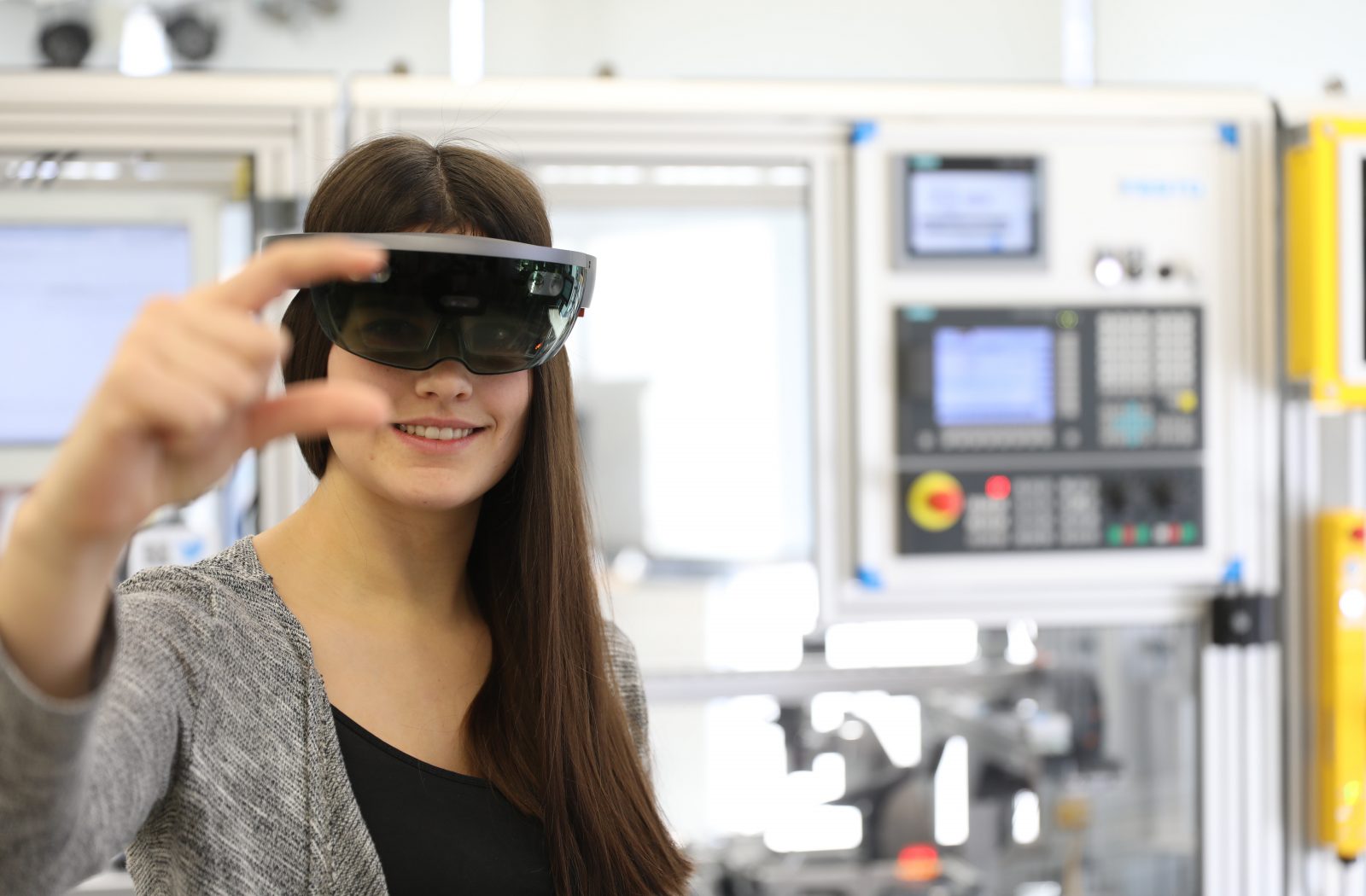 AI helps people merge data from different sources and then use the filtered information. Augmented Reality supports this, for example, with smart data glasses. Photo: SmartFactoryKL/A.Sell