Machines cannot develop on their own. It follows that full automation would equate to standstill. “Robots do not improve processes. Only humans can improve a process. Consequently, according to Mitsuru Kawai, vice president and head of manufacturing at Toyota, “people should always be the central consideration.” Similarly, Artificial Intelligence (AI) does not get any smarter by itself. “AI is a useful tool in augmenting human intelligence. It’s fast, but it is not smart. If there is no human to teach right from wrong, then, in the best case, it comes to a stop. In the extreme case, it will continue to perform ever more poorly,” said Prof. Martin Ruskowski, Chairman of the Executive Board at SmartFactory Kaiserslautern. “We need people in factories because of their manual dexterity and as engines of innovation. In our highly automated demonstrator environment, we also rely on manual work stations.”

“I see nothing written there that says turn off the lights on the production floors because machines can work in the dark,” said Ruskowski. “Unfortunately, Industry 4.0 has often been misunderstood. Far too often, companies rely solely on technical solutions. Yet, even Elon Musk, the apologist of total automation, recognized this as a mistake, admitting that people are under appreciated.” From that perspective, you could say far too often that machines and AI are overrated.

Technology does not evolve without people
“Sure, we could automate nearly everything,” said Ruskowski, “but why should we? We do not have to equip everything with robot technology if the same added value can be achieved by simpler means.” Ruskowski explains that fully automated production lines demand highly complex systems that cost a lot of money, are not very flexible, and subject to frequent downtime. Another argument is heard in Japan: “Such production would forever remain at the same level of development,” said Kawai. “The same basically applies to Artificial Intelligence,” added Ruskowski. “Errors will not be noticed and optimization potential will not be identified if no one is looking closely at what an AI tool is doing. Unless humans reflect on them, algorithms themselves are helpless over the long term and will remain limited.”

Nothing is as flexible as manual work
SmartFactoryKL reviewed and renewed the term Industrie 4.0 in 2019: the update resulted in the term Production Level 4 (PL4). “Our vision includes the latest technical innovations in the field of AI and redefines the role of humans on the production floor,” said Ruskowski. In fact, researchers and industry partners work at SmartFactoryKL on the joint develop of flexible production systems that can access machine capabilities (skills) across various technologies and locations via networks and data platforms. This enables companies (or the products themselves) to individually configure the manufacturing processes needed to fulfill the order. “Marketplaces” like Gaia-X display the skills available at all the connected partners, which other companies can then combine and book to form new production processes. Maximum resilience is assured and flexibility is also increased because if one machine fails, another is ready to take over the job. “Yet, no machine will ever be as flexible as a person in the near future,” said Ruskowski. “That is why we have decided to integrate many manual work stations in the Shared Production system that we are currently building at three sites in Kaiserslautern.”

Routine make people numb
Toyota began to notice fifteen years ago that some knowledge loss was occurring among its skilled labor force as production automation increased. The explanation was simple: “Workers had fewer and fewer opportunities to contribute their skills and ideas,” said Kawai. The AI trainers at SmartFactoryKL experienced a similar trend. “Boredom in the workplace dulls the workers,” said Ruskowski. He recalls an AI project with the Helmut Meeth Company where that was ongoing. The workers there had previously ensured quality control of glass products by means of a visual inspection. “They were quite happy when we were able to automate that,” said Ruskowski. “The manager of the project was glad that his colleagues could now be assigned higher value tasks.”

People and machines form the perfect team
“The world that we are developing could be labeled “people, machines, and software,” said Ruskowski. “We take the best and combine it into something new. Employees, OT, and IT form a production unit where the human is and always will be in control.” Mitsuru Kawai is also thinking in this direction: “Toyota does not rely on software or robots for the company’s further development, rather only on people – always on their skills and good ideas.” Of course, automation continues at Toyota and Mitsuru Kawai asks: “Robots are there to help people aren’t they? But, automation itself should never be the sole objective.” According to Ruskowski, “We must always have the courage to try new approaches. Along the way, we are allowed to make mistakes.” He added, “As scientists, we are always guided by facts over prejudices: No, AI will not create a surveillance state, for it is left to us how to shape our environment. No, automation does not lead to job loss, as clearly shown by the figures of recent years. And, yes, humans and machines make a great team, assuming the team captain is a human.”

Rethinking production at many levels
Artificial Intelligence tools, for example, Knowledge Graphs, attempt to achieve better results by mimicking the way humans think. Such tools promise many new opportunities to optimize the interactions between people and machines. “In the future, we will adapt the machines to the human, not vice versa. Machine operation will be as simple as using as a smartphone someday,” said Ruskowski. “The uniquely human skills are the main focus of our consideration.” The implementation of manual work stations in our Production Level 4 demonstrators is done with inclusion in mind. The worker is guided through the production processes by lights or pictograms without the need for extensive training or language abilities. 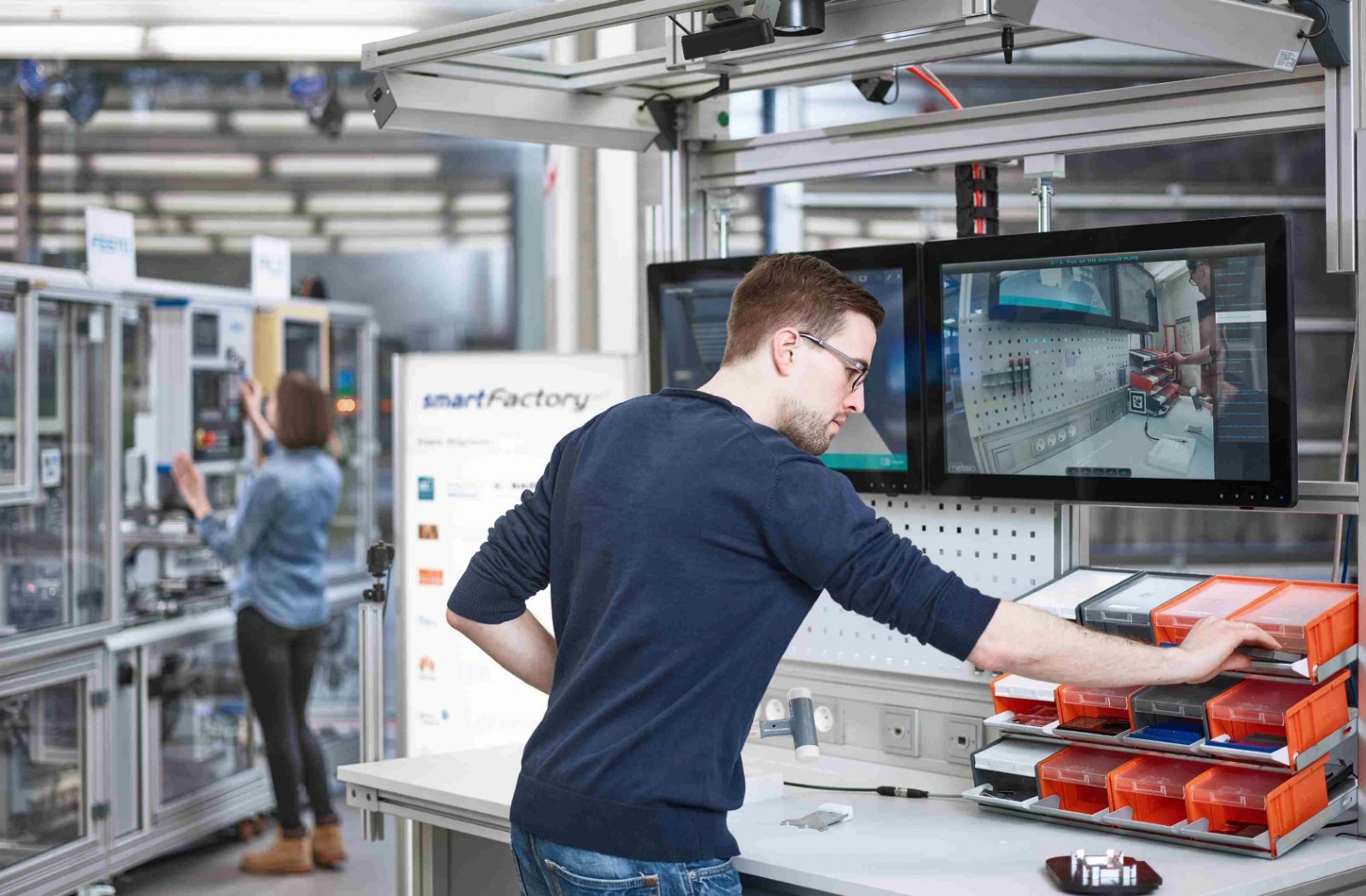