The aim of SmartFactoryKL is to pave the way for the intelligent factory of tomorrow.

The technologies required for the implementation of a smart factory are already available in the consumer electronics sector. The next logical step is their industrial application. Modern information and communication technologies such as wireless sensor networks, semantic product memories, mobile interaction or ubiquitous access to the web, are enabling the merger of production technologies with information technologies. With the help of today’s omnipresent internet, we can integrate individual elements of a production process into a flexible, self-organizing network of actuators, sensors and complete modules. Paradigms such as ubiquitous computing and the “Internet of Things” are facilitating the creation of intelligent environments in modern factories where the gulf between the real and the digital worlds is growing ever smaller. The “Internet of Things” in everyday life has delivered the vision for a production environment in the “Factory of Things” – to wit, the birth of the Smart Factory.
As a manufacturer-independent technology platform, together with our partners, we create and implement innovative factory systems following the concept of Industrie 4.0. SmartFactoryKL exhibits the world‘s first manufacturer-independent Industrie 4.0 production plant and shows just how high quality, flexible manufacturing can be efficiently implemented even for a batch size of one – regardless of whether in an existing production operation or a Green Field. Uniform interface standards enable a manufacturer-independent link to the production units, logistic systems, supply infrastructure, and IT systems. Challenging requirements already affecting production such as custom products, shorter innovation cycles, and more efficient on-site production can now be met.

A sample product is actually manufactured in the facility: A customized business card holder, where the color, laser engravings, and optional inlays can be ordered online by the customer. The product itself stores all information in a RFID tag and gives guidance to the production modules. The production process proceeds in different ways, depending on the design and availability of the production plant‘s modules. The flexible transport system dynamically connects with the various production cells and manual assembly stations. The current set-up: cross-site production 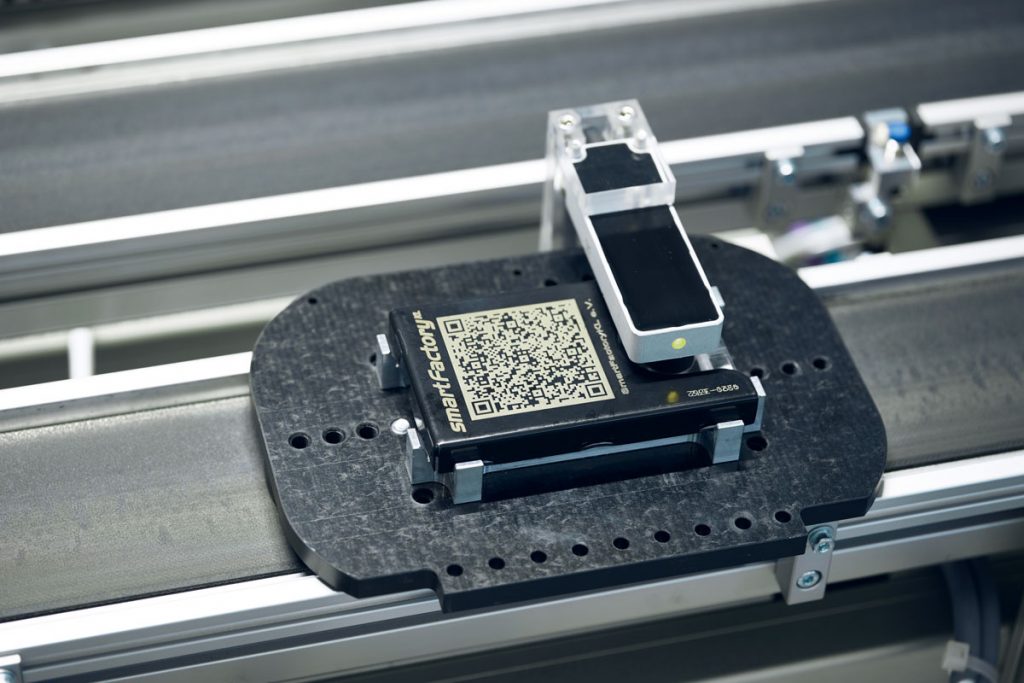 Manufacturer-independent standards enable a flexible system expansion. They include the RFID tag description that is defined from the data structure and data coding of the product memory. The second standard is the OPC UA communication. The third point is the standardization of hardware which means that the docking station, as well as the modules, have identical mechanical basic functions. Manufacturer-independent IT systems can be integrated into the production process thanks to these uniform standards.

A plant that makes history

We develop ideas for the continuous advancement of our Industrie 4.0 production plant in our SmartFactoryKL working groups. That’s our success strategy: “Progress within the network“. 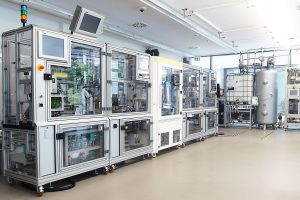 2014 We put our concept of a completely modular Industrie 4.0 production plant into practice for the first time. At Hannover Messe, we were thus able to present the world’s first manufacturer-independent production plant. In 2014, it consisted of five modules and was realized in this first version together with 10 partners. 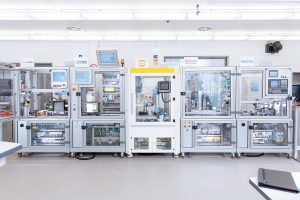 2015 A consortium of 16 SmartFactoryKL partners presented the expanded, modular Industrie 4.0 plant at Hannover Messe under the motto “Progress within the Network”. The plant now comprised seven modules. In addition, modularization was not only limited to one dimension, meaning one production line but now possible for two dimensions or all directions. The plant also featured the manual work station. By presenting elements of human-machine interaction, it was now possible for the team to integrate the important topic of “future labor” into the demonstration. 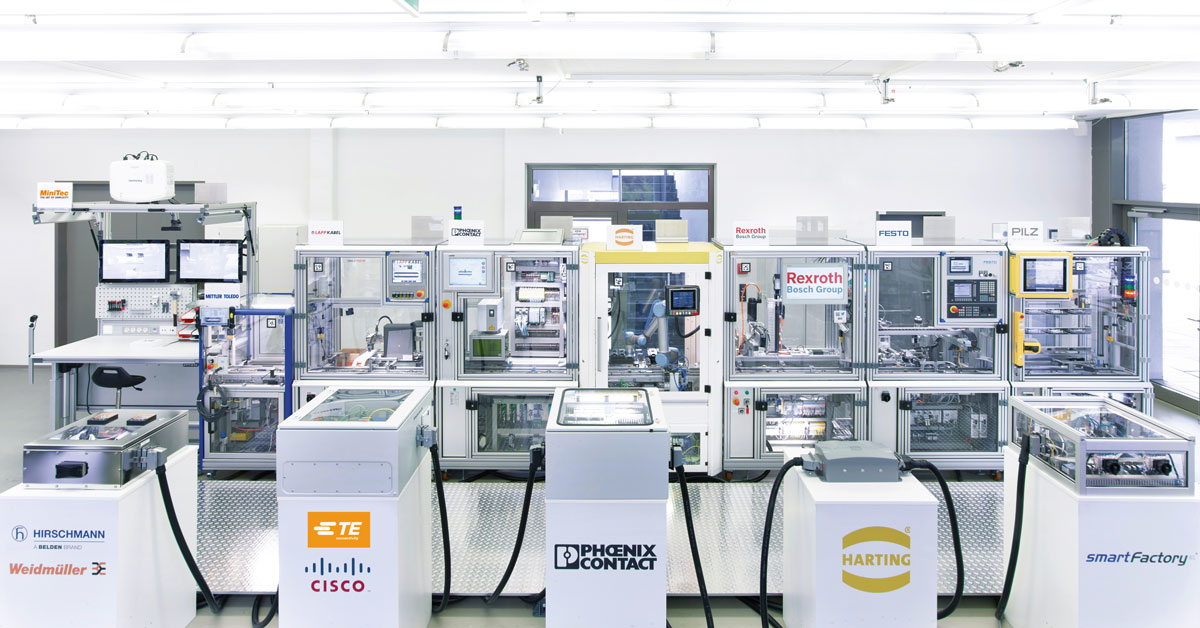 2016 The exhibition of the Industrie 4.0 production plant became proof of concept: Central questions on the factory of the future had been solved: Plug & produce, predictive maintenance, scalable automation, failure-proof maintenance, and worker assistance. The strict modularization of the plant led to a new potential for the IT system partners such as the topic of predictive maintenance. This made it possible to integrate the IT partners more into the further development of the plant. The cooperation of the partners had led to market-ready technologies and first products. The consortium consisted of 18 partners. 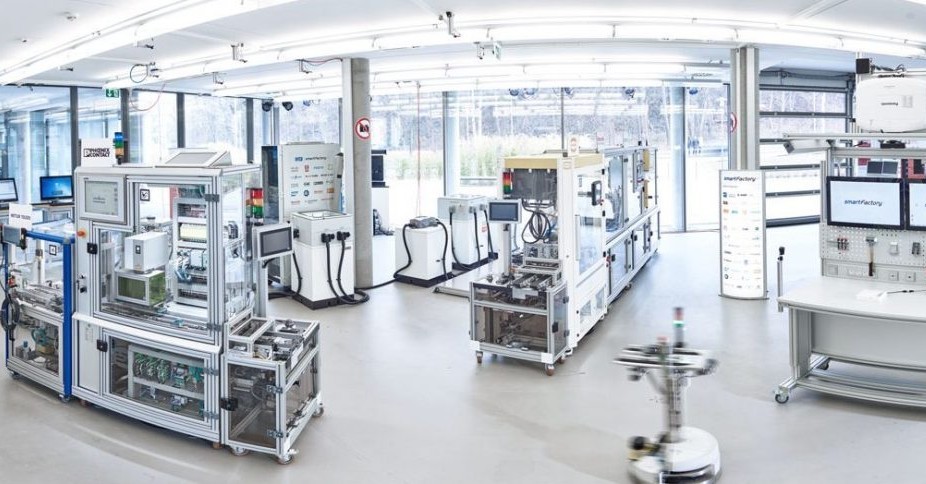 2017 The expanded Industrie 4.0 production plant appeared in a completely new layout: distributed over two production cells and a manual work station. The cells are connected thanks to a flexible transport system which distributes the products from station to station. This improvement showed that SmartFactoryKL’s approach was not only valid for one production line, but for various lines – or even various sites, thanks to the now decoupled logistics. Again, 18 partners participated in the consortium. 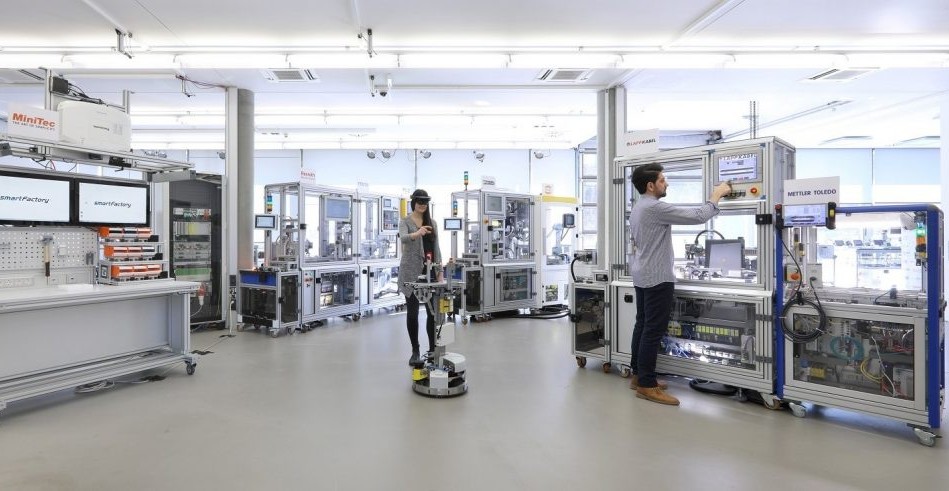 2018 SmartFactoryKL along with 19 consortium partners worked on how production plants could be transformed digitally. The solution is retrofitting with Edge Devices. The partner companies use various edge devices in the Industrie 4.0 production plant. The devices collect data from the production machines and forward it to a cloud platform using the standard OPC UA communication protocol. Intelligent analysis of the data allows conclusions to be drawn about the condition of the system. To demonstrate the modularity of the plant, the manufacturing process is divided into four cells: three of them are automated and one is the manual work station. The flexible transport system forms a connection between all cells. This system is equipped with 5G technology for visual quality control and is integrated into the extended modular safety concept. In addition, Augmented Reality is used with smart data glasses to support production specialists. 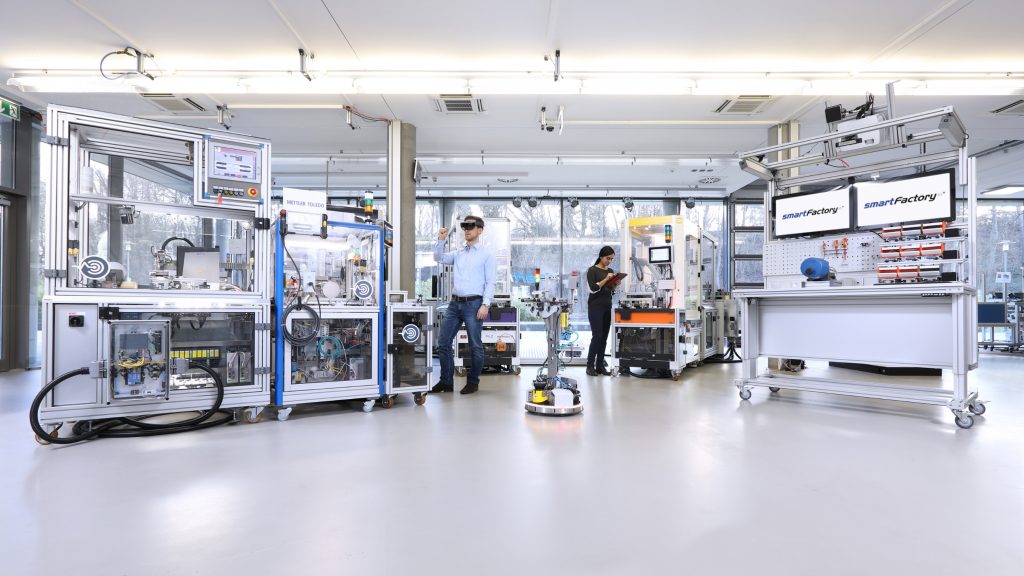 2019 This year the motto is: “Human-Centric Support: Artificial Intelligence in Manufacturing.” The demonstrator shows various use cases for topics like anomaly detection, condition monitoring, and predictive maintenance. Another important component of flexible production systems is sustainable and high-performance infrastructure. To respond to increasing requirements, SmartFactoryKL is being equipped with new infrastructure nodes. These nodes are scalable and can support several production stations. In addition, they are also equipped with TSN (Time-Sensitive Networking) and Edge Computing technologies to enable data-driven applications. The consortium for the last trade fair included the participation of 15 partner companies.