Manufacturing a truck requires good planning. Especially, when developing a revolutionary new production logic to build it. “We are stepping into the future with our production ecosystem,” said Prof. Martin Ruskowski, CEO of SmartFactoryKL, to the association members who attended the annual Innovation Day. “A cross-technology network with tasks distributed to various locations is something entirely new.” Definitions are required for material handling, modular machine skills, communication structures, tasks for manual work stations, the artificial intelligence processes implemented, human-machine interactions, etc. “We may build trucks from studded bricks,” said Ruskowski, “but, from a manufacturing standpoint, it still requires a great effort. After all, we are never about the product, but about the HOW of production.”

The production has left the building
A manufacturing company normally focuses on orders that can be executed by the machines and employees present in the factory. If a particularly lucrative order comes along, they may even decide to procure an additional machine. “Often, the machine later stands idle – not an economical option for the company,” said Ruskowski. “That is the situation we start to question: Can we ensure this machine continues to be a lucrative investment? Can we eliminate the need to purchase such big ticket items? How does flexible production work?” The answer is Shared Production. This concept introduces a third player who can put the idle machine to use without having to own it. A customer formulates exact requirements on an online platform, such as sawing, soldering, assembly, etc. Parameters such as quality, processing time, energy consumption, CO2 emissions, etc. are also specified. Based on these requirements, the platform generates priced proposals that identify suitable machines for the job. “This is where resilience starts. Completely new options appear when able to contract with different machine modules across Europe. A situation where one of my machines is defective or operating at full capacity is no longer critical. I can simply book a new one,” said Ruskowski.

Resilient Production
Scientists formulated the theory of shared or distributed production as Production Level 4 in 2019. Recent events then began to serve as a catalyst for accelerated technical implementation: the Corona pandemic, the blockage of the Suez Canal, and the sanctions hampering global trade. “The term resilient production had been floating around the hallways of upper management for some time,” said Ruskowski. “Our approach was to adopt the self-stabilizing logic of the Internet: The new production configuration should be as easy to use as an online marketplace.” It can be implemented on a secure platform known as Gaia-X.

Think in new dimensions
Shared Production, as practiced at SmartFactoryKL, is currently defining tasks at three different sites to jointly produce a configurable trailer truck. The contract manufacturing role in this case is given to a lab in the department of Machine Tools and Controls (WSKL) at TU Kaiserslautern, which mills the trailer superstructures in the form of a tanker. What is so special about this? While all three machines at the site have the skill to perform the “milling” task, their date of manufacture is different and each offers a different grade of quality. “That is very realistic,” said Ruskowski, as he led visitors on the tour. “In an online market place, the prices will vary according to the quality specification. We offer the oldest machine at a low price, for example, because it does not deliver great accuracy. But, for a particular job for a particular customer, that might be perfectly adequate.” In the future, skills will act as autonomous agents (multiagent system) and communicate among themselves to determine which one is optimal for making the product based on the customer specifications. That is the aim of ongoing research in the MAS4AI project. “We are addressing many more questions in smartMA-X, a sub-project in the Gaia-X research,” added Ruskowski. For example, we are asking: How is a skill entered on Gaia-X? How does a machine legally negotiate a contract – perhaps, across national borders?”

Modular components
“We accepted an additional research challenge at the DFKI Innovative Factory Systems Lab: to develop a modular component within the framework of the DIMOFAC research project,” said Ruskowski. The component is to be capable of providing multiple skills: 3-D printing, recycling of faulty prints and surplus material, as well as assembly and disassembly. “The 3-D printing, for example, will implement special superstructure requests for the trailer unit,” said Ruskowski. The ability to provide several skills in one component significantly increases the flexibility of that production cell.”

Production cell A
Another production cell at the SmartFactoryKL Lab became known throughout the world as the first Production Level 4 demonstrator. The cell was featured at two consecutive Hannover Trade Fairs (Hannover Messe) and is currently part of the Production Level 4 ecosystem in Kaiserslautern, with its construction beginning last May. “To produce additional parts for trucks,” explained Ruskowski, “a significant expansion is planned that will allow us to make two products here in the lab: the now familiar USB stick (studded brick form), plus truck parts.” Why makes this so special?  Two manual work stations are integrated in this complex production plant, one of which is – PAUL – the product of another research project. “We never decide for automation without careful deliberation,” said Ruskowski. “We have formulated the specifications in such a way that a manual work station is more practical. Humans are more flexible than machines, and that is needed in this case.”

Research & Industry
SmartFactoryKL is noted for its practical relevance and close cooperation with its industry partners. “Representatives from our member companies meet with our researchers in a working group,” said Ruskowski. “This exchange ensures that our research effort is always matched against the requirements of the companies.” Hartmut Rauen from VDMA once emphasized that only practical research projects are worthwhile. Many such projects are ongoing by the factory innovators in Kaiserslautern! 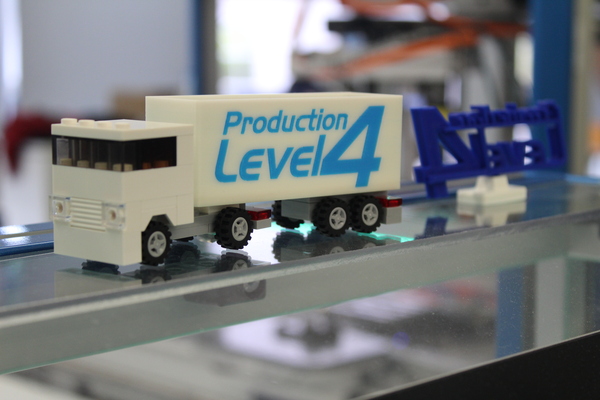