A key feature of Industrie 4.0 is flexibility in the production processes. Production facilities must be quickly and easily converted to allow for new production variants. New machines must be easily integrated into the production process: “Plug & Produce.” But, can a flexible conversion design also ensure safety at the same time? The answer is yes, using a modular safety concept under continuous development since 2018 by a consortium of research and industry partners at SmartFactory-KL. The research results are published in the latest white paper with the title “Safety requirements for digital machine representation 2020.”

The publication represents the next phase of development in a series of white papers featuring the safety concept for a modular industrial plant which are written at the SmartFactoryKL by Working Group 2 (Connect & Control). This white paper focuses on digital representation, the so-called digital twin, or virtual image of a production system. “We need to use digital twins to satisfy the complex requirements of implementing dynamic machine safety,” said Michael Pfeifer, member of the Smart Manufacturing Council, coordinator of the Industrie 4.0 working group at TÜV SÜD, and co-author of the white paper. The primary focus is on processes at the software level.
What’s new: all safety parameters are entered directly in the administrative shell. The sum of these parameters is then stored in a sub-model of the administrative shell. This model is not static, but can contain different safety parameters depending on the requirement.

The Plug & Produce processes at SmartFactory-KL clearly show the advantages: when a production module (station) is connected to the system, a conformity check is necessary to determine whether all of the requirements have been met. In addition to the safety requirements, this check can also include other sub-models such as for the power and LAN connections, or queries indicating at what point the module is to be installed in the system.

“The big advantage of the administrative shell is that all of the necessary data and information is directly available and quick access, if required, is guaranteed. The process itself is very flexible and efficient and it advances the concept of ​​dynamic safety even further,” said Alexander David, researcher at DFKI and head of WG2.

Safety agents are another aspect highlighted in the new white paper. In contrast to the aforementioned sub-models for modular certification, which act selectively and on request, safety agents are used for permanent monitoring of production from a safety perspective.

A risk assessment runs in the background as a query of a pre-defined decision tree. For example, an Automated Ground Vehicle (AGV) can detect, by means of sensors, a danger to humans in the designated lane. Previously, the common response was to immediately stop the AGV, whereas now a safety-agent checks for other options in the decision tree, e.g., a change of route. Thanks to the complete networking of the factory floor, the safety agent recognizes that an alternative route is possible and safe – accordingly, the AGV route is changed and production downtime is avoided.

In the future, safety agents will be optimally integrated into the Production Level 4 demonstrator using an agent-based system architecture.

Findings tried and tested in practice

“The SmartFactory-KL initiative enables a discussion of dynamic machine safety and the requirements and possible solutions involved in its implementation – directly with relevant companies or component manufacturers,” said Michael Pfeifer in listing the advantages of the close collaboration. “Furthermore,” added Pfeifer, “we can test to verify new ideas on the new demonstrator, which greatly accelerates implementation in the context of industrial pilot projects.”
William Motsch, researcher at SmartFactoryKL and co-author, also sees the white paper as an important step towards fully functional, modular certification: “This capability is now possible not only at the plant and component level, but also at the software level, which will significantly reduce downtime.” The findings are now being put into practice and tested by WG 2 at SmartFactoryKL in the new Production Level 4 demonstrator.

The white paper is provided as a free download in PDF format: Link to White Paper 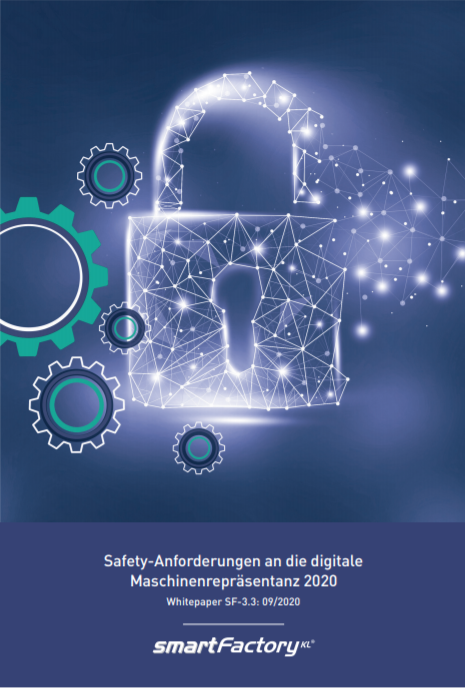