MAS4AI is a project focused on selected sectors of industry that plans for their smart digital transformation over the next three years using the tools of Artificial Intelligence (AI). The aim is to achieve resilient production that can react flexibly to changing requirements or disruptions in the added value networks. The underlying basis is the large variety of products in lot size 1 in complex manufacturing operations.

Single agents acting in concert
Multi-agent systems are an area of distributed artificial intelligence research, in which several differently specialized “intelligent” and mostly autonomous software components (agents or bots) act in a coordinated manner to jointly solve a problem. The researchers are working towards the long-term goal of stable production, which among other things, relies on Shared Production and Production-as-a-Service. Communication, synchronization, and coordination of skills (production capabilities) are needed in a production network in order to implement our vision. This coordination will be performed by AI processes in the future. The European project partners envision a future production that can be distributed in European networks (like GAIA-X).

People make the decisions
Scientists and engineers from Greece, Germany, Italy, Lithuania, the Netherlands, Poland and Spain are initially working on a modular system architecture and a communication structure to create the foundation on which to integrate industrial AI services for smart production. In the process, human participants will always retain control over the AI technologies. The prerequisite for this is to have AI processes designed in a way that is always understandable to the operator. Only then can they be validated, optimized, or modified. Demonstrators oriented on a series of industrial use cases are being developed in MAS4AI. The use cases are in European industrial sectors of high added value, such as companies from the automotive industry, contract manufacturing, bicycle production, or wood processing.

Production Level 4 as the visionary basis“MAS4AI fits perfectly into our concept of Production Level 4, which is based on production-bots and modular networks. Our concept envisions future production resources that offer their capabilities (skills) to the networks and autonomously (self-directed) call up the products,” said Prof. Martin Ruskowski, Chairman of the Executive Board of SmartFactoryKL, Head of DFKI’s Innovative Factory Systems research, and Chair of the department of Machine Tools and Controls at TU Kaiserslautern. “The products in our vision know their attributes and their current production progress. Such products search their own way among the skills to complete their own production. This may take place in a facility, but also in a Europe-wide network.” 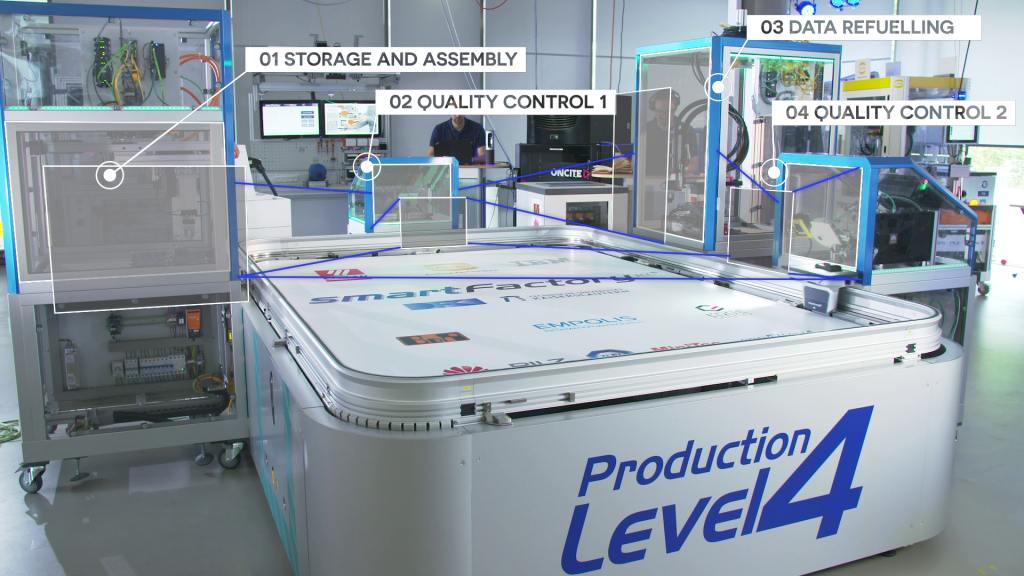 The consortium is developing the following four topics:

A fundamental concept in MAS4AI is the integration of all smart components (machines with attributes like self-direction, self-description, and self-learning abilities) in a holistic system architecture. This facilitates easy development and use of industrial AI technologies. Software developers, system integrators, and end users will all benefit because the hurdle for the use of AI is low. “We expect this to generate revolutionary ideas for business models as well as brand new market opportunities,” said Ruskowski.