Modular and flexible production is a vision of the future. The exchange of modules in an industrial environment requires a lot of time and effort, especially when considering the CE certification. “Our implementation of the module exchange is geared towards the needs of industry,” said Prof. Martin Ruskowski, Chairman of the Executive Board at SmartFactoryKL. “Together with partner companies, we have developed a process that allows the integration and certification of a new module in just a few minutes.” The process is made possible by intelligent worker assistance, a new generation of connector interfaces, and automated conformance checks. “Integrating a new production module to an existing system leads to complex safety issues concerning the interactions between modules and plant,” said Alexander David, Head of Connect & Control working group. “Our system is capable of dynamically ensuring modular safety conformance through digital certification while automatically taking the surrounding conditions into account.” The production modules have an administrative shell sub-model that stores the relevant safety parameters, which enables the dynamic release of each individual module and its interface. Following successful conformance checks, a digital certification is generated and the machine group is released.

SmartFactoryKL‘s new modular, manufacturer-independent production plant is functionality-based. If some function is lacking that is necessary to manufacture an ordered product, the system automatically prompts a new configuration of the plant. The worker is notified of the missing module by the assistance system and given visual cues on how to physically connect it to the demonstrator. A new connector, specially developed for the requirements of modular and autonomous production systems, is used. To ensure the module is integrated into the infrastructure at the right place and connected at the right time, intelligent interfaces are needed. Network control is autonomous and dependent on the status of the production plant. In this way, the user is not endangered by incorrectly pulling the connector and also that the production plant achieves the optimum availability. Both are only possible when the plug connector is equipped with sensors, actuators, and distributed intelligence. Furthermore, its active digital twin enables the management of the entire infrastructure. The traditional connector is transformed into an intelligent module interface.

As the interface to the production infrastructure, the success of the plug connector depends on standardization to ensure compatibility with the other modules in the infrastructure. The SmartFactoryKL working group is not the only one dealing with these future interfaces, but the German Commission for Electrical Engineering (DKE) has also established a standardization group to work on the issue.

Once the physical coupling is achieved, the 5-step conformance check begins:

1. Discovery phase:
The first step is to check if the communication between the module and the production plant is established.

2. Validation phase:
To check whether the module is properly positioned, neighbor detection is performed. For validation, neighboring modules must successfully exchange module IDs and safety parameters via their administration shells.

3. Plausibility check:
The risk analysis to determine if the module can be released is based on a decision tree. The decision trees are defined by the manufacturer, stored in the administration shells, and map all foreseeable safety conditions using a predefined set of parameters. The branches of the decision tree end in so-called “leaves”, which correspond to the risks of each parameter. For example, these could be the parameters defining the exact position of a module on the conveyor line. In this case, the distance between two units is checked to rule out any possible danger.

4. Digital conformance assessment:
Release approval is given only when all parts have been virtually checked and determined to be CE compliant.

As soon as this release occurs, the functional capability of the new module is released for use in the network. The system recognizes that all the necessary functions are now available for production and manufacturing begins.

Transparency for the worker

The entire process of conformity testing is automated, yet transparent. The worker sees every individual step clearly displayed on a tablet. The entire process is traceable. The transparency makes it possible to immediately trace a possible source and find the right solution in the event of an error.

SmartFactoryKL has created an update of Industrie 4.0 and called it Production Level 4. Andreas Huhmann, member of the executive board, describes the core element in this way: “One of our declared goals is to make our production systems more flexible while keeping them robust and highly reliable. We achieve that goal through autonomous processes. At SmartFactoryKL, we refer to the extensive automation of production systems that employ people with specific skills and assist them with smart processes, as Production Level 4 or, simply PL4. The new demonstrator is designed in this context and represents the first technical engineering step towards PL4. Development benefits from our experience with the world’s first, modular Industrie 4.0 production plant, which is also partially on exhibit at Hanover Trade Fair (Messe) 2020.

The member companies that worked on the use case: Empolis, Harting, MiniTec Smart Solution, and TÜV SÜD.

Overview of the scenario

SmartFactoryKL is a manufacturer-independent research platform. The new demonstrator was designed and built accordingly. The use case itself is quite simple: a customer orders an individually configurable USB memory stick. The visual characteristics (color and labeling) of the USB are selectable, as are the data loaded into the studded plastic block (German: noppenstein). To store the quality control photos on the USB stick, the demonstrator requires the use of a special quality module that has the technical capabilities. If this module is not already integrated in the production process, the system detects this and triggers the module exchange. The notice is displayed on the worker’s tablet. The worker must then physically integrate the module into the demonstrator’s production process.

Thirteen member companies are participating in the construction of the new demonstrator. Below are some selected reasons for their active participation in SmartFactoryKL:

Dr. Stefan Wess, CEO, Empolis Information Management GmbH
“The results of the research efforts in Kaiserslautern have been spreading under the keyword Industrie 4.0 since 2011. The term has now even become internationally established. The new demonstrator, which combines human and artificial intelligence, represents the next stage­ – Production Level 4.”

Dr. Marius Orfgen, General Manager, MiniTec Smart Solutions
“The demonstrators have given us important impulses for our own development programs. Especially, when new protocols or devices are under discussion, working jointly with other members, we can test what will be demanded in the future by our customers.”

Klaus Stark, Head of Innovation Management, Pilz GmbH
“We are convinced about the new SF Technology Initiative concept. The vision statement 2025, the research initiative, the engineering orientation, the new working groups, and last but not least, the establishment of the European network, are challenges in which we want to actively collaborate and participate – just as we have done in the past.”

Ralf Bucksch, Technical Executive Watson IoT Europe / IBM Sales & Distribution, Software Sales, IBM
“The framework of the Smart Factory Technology Initiative allows us to jointly discuss today’s digital manufacturing concepts in a secure environment and put them into practice for the future.” We develop solutions for the future on neutral ground, jointly with all members of the association – without the sales targets and the usual competitive thinking so necessary in the market.”

Dr. Markus Berg, Manager R&D Production, proALPHA
“The demonstrator shows how Industrie 4.0 concepts and the digital transformation can be specifically implemented. Together with SmartFactoryKL, we are making digitalization a tangible experience for visitors there. And that’s exactly what we’re all about: We don’t just talk about digitalization. We want to make it tangible. The demonstrator is an opportunity for us to do this.”

Dr. Cesim Demir, CTO Manufacturer and Automotive Solutions, Huawai
“Huawei sees great potential to jointly evaluate and further develop new technologies with partners in the networked digital factory, i.e., Smart Factory. SmartFactoryKL, with its network of about 50 members from industry and science is a strategic partner for us.” 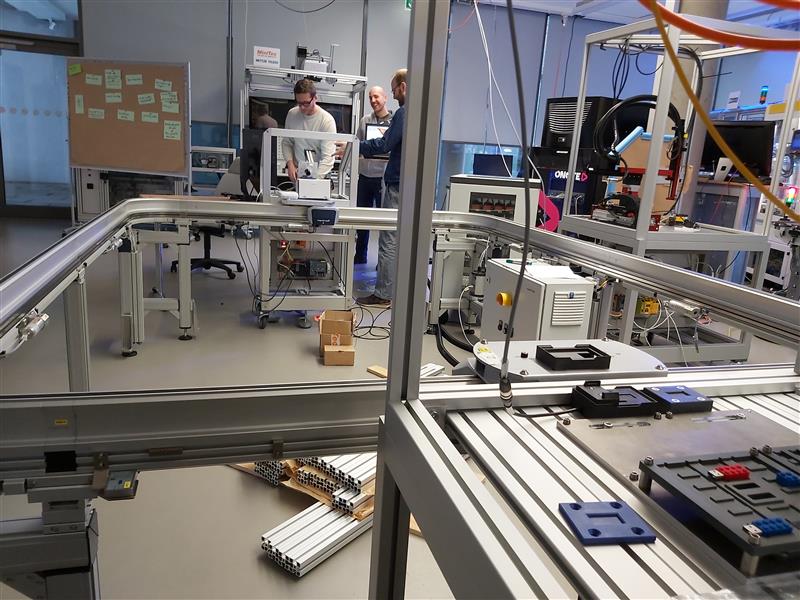 Planned setup for the Hanover Fair 2020. The new demonstrator exhibits the first steps towards Production Level 4.