The royal couple’s working visit to Germany this year, which includes Dutch Cabinet Minister of Foreign Trade and Cooperative Development Sigrid Kaag, brought them to Rhineland-Palatinate and the Saarland. Leading a delegation of about 60 representatives from industry and science, the royals engaged in many talks with representatives of numerous stations, including SmartFactoryKL and the German Research Center for Artificial Intelligence (DFKI) in Kaiserslautern and Saarbrücken. Focus topic of the visit: Cooperation between The Netherlands and Germany in the area of Industrie 4.0. In this context, SmartFactoryKL and the Dutch Smart Industry Initiative have signed a memorandum of understanding to work closely together in the future.

The goal of the “Smart Industry Initiative,” as stated by The Netherlands, is to have the most flexible and best digitally integrated production network in Europe by the year 2021. Along the way, they seek to ensure solidarity with German experts from research and business. German-Dutch cooperation in this area is essential because of the close links between Dutch and German companies in the supply chain.

“Joint European development of Industrie 4.0 is of major importance for the future competitiveness of European industries,” said Prof. Dr. Detlef Zühlke, Chairman of the Board of the Technologie-Initiative SmartFactory KL e.V. “As expressed in our memorandum of understanding, we want the exchanges with representatives of the Smart Industry Initiative to help promote and advance the broad Industry 4.0 concept of a secure and digital economy,” he added after the signing ceremony in Saarbrücken.

Royal screening at the demonstrator

At the conference, Her Majesty Queen Máxima and Anke Rehlinger, Minister for the Economy, Work, Energy and Transportation of Saarland, visited the Industrie 4.0 demonstrator of SmartFactoryKL: Prof. Dr. Zühlke and Prof. Dr. Wolfgang Wahlster, CEO of the German Research Center for Artificial Intelligence, introduced their guests to the various aspects of Industrie 4.0, among them human-machine-collaboration.

The previous day, about 60 representatives from Dutch industry and science met at SmartFactoryKL with representatives of KSB and AREND Automation, member companies from Rhineland-Palatinate in addition to DFKI in Kaiserslautern. Following the visit to the Industrie 4.0 production plant at SmartFactoryKL, participants shared their experiences in two workshops with Prof. Dr. Detlef Zühlke, Dr. Sönke Brodersen from KSB, Prof. Dr. Martin Ruskowski, Head of Innovative Factory Systems research department at DFKI, and Dr. Markus Jostock from Arend Prozessautomation. Topics were internationalization and standardization, in addition to the potential of blockchain technology in manufacturing. At a working lunch in Trier as guests of the Dutch Trade Minister, further opportunities for future intensive talks were discussed. 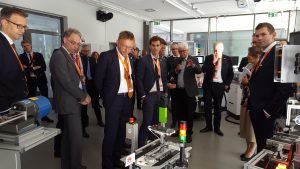 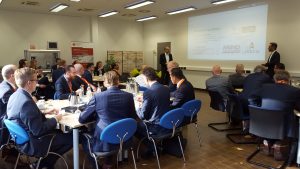