SmartFactoryKL is introducing its new demonstrator plans for the Hannover Messe 2020 for the first time at SPS (Smart Production Solutions Trade Fair) in Nuremberg. The new demonstrator represents a first step in the implementation of our Vision 2025. The demonstrator will be under continuous further development in the coming years. The focus in 2020 is on a new system architecture and manufacturer-independent module exchange. “We chose Production Level 4 to express where we want to be with our technologies in the year 2025,” said Prof. Martin Ruskowski, Chairman of the Executive Board at SmartFactoryKL. “The new concept demonstrator shows how we and our partners are taking a practical approach to the implementation of autonomous production.”

The SmartFactoryKL exhibit is located in Hall 5, Stand 368.

5G and artificial intelligence are shaping the future of manufacturing
“These are technologies that we consider to be essential for the future of manufacturing,” said Ruskowski. “Without fast communications and low latency, artificial intelligence (AI) cannot develop to its full potential.” The 5G technology from Huawei has been part of the demonstrator since 2017 and this year, Deutsche Telekom became a member of SmartFactoryKL contributing its own 5G applications. Other members, including Empolis, Harting, B&R, GEC, Pilz, IBM, KIST Europe, DFKI, and proALPHA are engaged with AI. According to Ruskowski, “SmartFactoryKL is a manufacturer independent platform, where companies can test and implement new technologies with us.” Fellow Executive Board member Andreas Huhmann added: “This transfer from theory into practice is one important part of the decision by our 53 member companies to get involved.” The companies participate in subject area working groups on currently relevant issues. The experts at SmartFactoryKL lead the working groups, while the industry members express their requirements, actively shaping the content and taking the results back for implementation in their production systems. “We think it is critical that our members cooperate along the way,” said Ruskowski. “It is quite usual for the companies to think only about themselves. But, this is not helpful in promoting Germany as a center of excellence.”

Production Level 4 – advanced development of Industrie 4.0
In October 2019, SmartFactoryKL released its Vision 2025, which is summarized by the buzzword Production Level 4. “We chose that term to emphasize that consistent development of Industrie 4.0 can only be achieved through autonomy (i.e., with independent production modules) and a combination of both human and artificial intelligence,” said Ruskowski. He went on to say, “Level 4 also indicates that the aim is not deserted factories void of humans, as defined for Level 5 autonomy.” Production Level 4 equally integrates automation, IT, and people.

New demonstrator to exhibit Production Level 4
Currently, a new demonstrator is being constructed according to the principles of Production Level 4. Representatives from SmartFactoryKL say the first step into the future will be ready in time to be shown in Hannover in 2020. “We develop a modular system architecture that is scalable and upgradeable. In Hannover, we show our system enabling the effortless interchange of equipment from different suppliers,” said Ruskowski. The SmartFactoryKL system represents a manufacturer-independent production plant. For example, the safety conformity certification is integrated in the asset administrative shell. “The demonstrator is designed to permit further development each year so that in five years time, we attain Production Level 4,” said Ruskowski. “Our cumulative knowledge and abilities flow into the plant each year, so we can show what is technically feasible at the Hannover Messe,” said Andreas Huhmann. 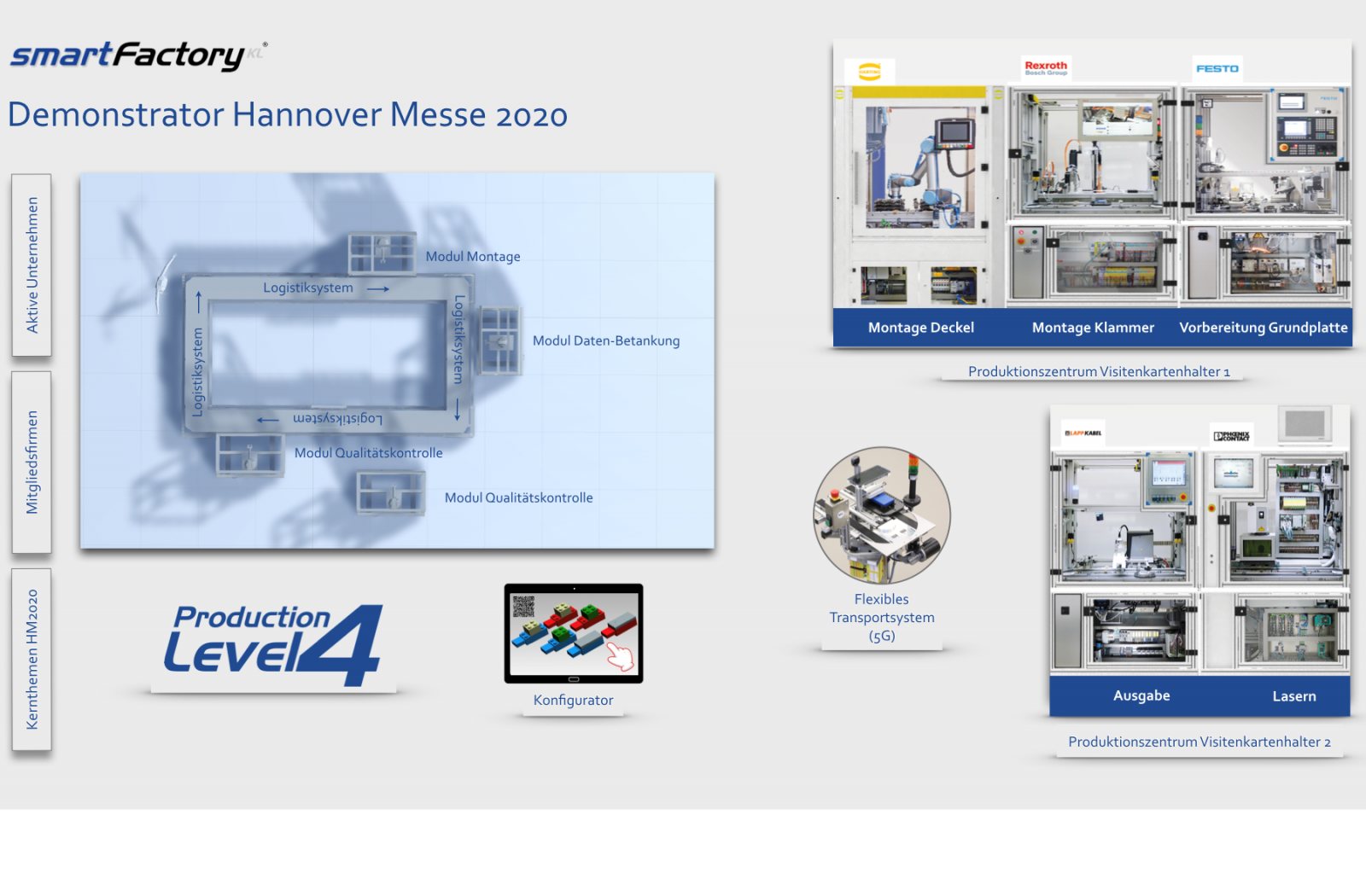 Screenshot of the new demonstrator - interactive exhibit at SPS