“We create visions and subject them to technical testing,” said Prof. Martin Ruskowski, Chair of SmartFactory Kaiserslautern. “So it is with the GAIA-X project and also for Production Level 4 and the digital Hannover Messe. As researchers, we are always in unexplored territory. But, we do not let that deter us.”

A headline and an extensive program
SmartFactoryKL and its members formulated a new byline for Hannover Messe 2021: With GAIA-X Towards Production Level 4. “GAIA-X is a major European initiative and a key element in our vision of Production Level 4. This is why our exhibit primarily features GAIA-X and Production Level 4,” said Ruskowski. “We also provide an outlook on multi-agent systems and their role in the future. As always, our demonstrator will be the center of attention. The demonstrator is the technical implementation of our Production Level 4 (PL4) vision and an initial technical step that shows our ideas really work,” he added.
On April 12, SmartFactoryKL will broadcast live all day long from the Living Lab plus, intermittently, on Tuesday through Thursday in 25-minute time slots via the show’s Messe portal and on YouTube. The topics revolve around future modular safety requirements, new system architectures, artificial intelligence in manufacturing, ERP systems of tomorrow, interchangeable modules and automated release, the role of humans in factories, and many, many other topics as well. Prof. Ruskowski will present the vision in his keynote address on April 13 at 2:45 p.m. Then, on Thursday (April 15), the topic is “10 Years of Industrie 4.0” at 1:00 p.m.

GAIA-X and Production Level 4
The GAIA-X data platform is a prerequisite for shared production, as recognized by SmartFactoryKL in 2019 in its vision of future production, Production Level 4 (PL4). GAIA-X will ensure secure and reliable data exchange between machines and data services. “Data sovereignty must be guaranteed on such a platform for companies to participate with their production machines,” said Ruskowski. PL4 relies on a networked structure of production, in which machines announce their capabilities so that all partners in the network can call on them for use in production. Whether the production system sits on a factory floor or is spread across the whole of Europe will no longer matter. The coordination will be performed by software agents (production Bots), which confer among themselves and execute the orders. “We currently have several research projects involving multi-agent systems,” said Ruskowski. Some involve automobile manufacturers that have recognized the signs of the times. They represent the core of our vision.”

At Hannover Fair since 2014
The first Industrie 4.0 demonstrator was exhibited at the Hannover Fair in 2014. In 2020, SmartFactoryKL and its members wanted to show the first Production-Level 4 demonstrator, but the pandemic and the cancellation of the Fair made that impossible. “We have been and still are a reliable partner of the Hannover Fair. That is why we plan to participate this year,” said Ruskowski. The new demonstrator was finished in 2020 after a nine month effort. The original number of 11 partners in the creation of the new demonstrator has grown to 22 today. “There have been many intense and exciting discussions at the meetings and in the working groups,” said Ruskowski adding, “And, sometimes we were acting ahead of the curve. Although GAIA-X had only been presented as a concept shortly before, we had already implemented a GAIA-X use case. At first, this generated many questions because no one quite knew what GAIA-X was all about. Today, everyone wants to participate.” SmartFactory-KL is currently working on the technical proposals for GAIA-X, dealing with how companies, machines, and services will connect to GAIA-X. The research project is called smartMA-X and our demonstrator in Kaiserslautern serves as the test bed.

22 Members of SmartFactory-KL initiative collaborate on the world’s first PL4 demonstrator
The pandemic forced many manufacturing firms to realize how hierarchical structures are vulnerable to external factors. Resilience has become the buzzword of the day. “Nothing new for us,” said Ruskowski. “Resilience in manufacturing has been one of our goals for many years, along with buzzwords like production optimization, resource conservation, and multi-agent systems. Our vision completely reformulates production. For example, we are developing a new system architecture that breaks down the rigid hierarchical structure.” During the time of the pandemic, the members of SmartFactoryKL met in virtual working groups to review research findings, plan the next strategic steps, and consolidate new technologies. The participation of each company varies greatly. “Some are engaged intensively in the working groups, others collaborate on new development and testing of prototypes, while others contribute new technical designs,” said Stephan Hamm, who is responsible for member collaboration on the demonstrator. 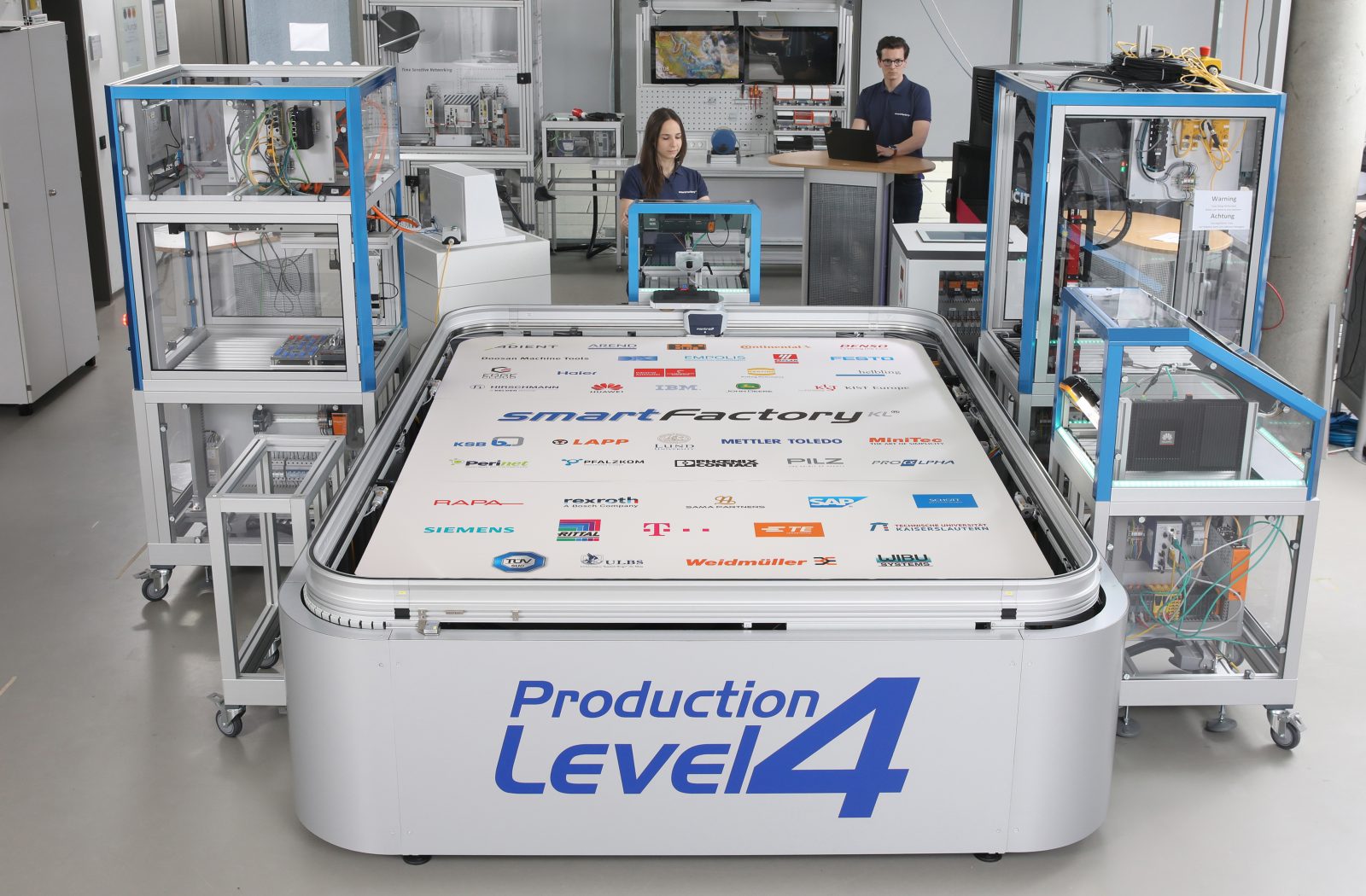 SmartFactoryKL refers to a research and industry network supported by three pillars – a non-profit association which is joined by two research institutes. Membership in the Technology-Initiative SmartFactory KL association is open to research institutes and industrial companies. The association explores the issues related to industrial manufacturing being studied at the research unit Innovative Factory Systems at DFKI and at the Department of Machine Tools and Controls (WSKL) at TU Kaiserslautern. Since 2019, the responsible person for organization and content has been Prof. Martin Ruskowski. He is the chairman of the association's board of directors, head of the DFKI research department, and faculty chair. SmartFactoryKL brings stakeholders from industry and research together in a unique Industrie 4.0 network, to facilitate collaboration on joint projects to develop and implement concepts for the factory of the future. The manufacturer-independent demonstration and research platform enables joint testing of innovative production technologies by industry representatives and researchers in a realistic factory environment. In 2016, the German Federal Ministry for Economic Affairs and Energy (BMWi) German Federal Ministry for Economic Affairs and Energy (BMWi) officially recognized SmartFactoryKL as the consortium leader of the Mittelstand 4.0 (SME 4.0) Competence Center Kaiserslautern . In 2019, the network revisited the concepts of Industrie 4.0, which resulted in the upgrade now known as Production Level 4 (PL4), and in 2020, SmartFactoryKL introduced the world's first PL4 Demonstrator, where the goal of autonomous production will be continuously advanced in the coming years. Since 2020, the association has also participated in the European GAIA-X network research project smartMA-X, where the PL4 demonstrator plays a major role in the European project. The Technology Initiative SmartFactory KL is also a founding member of SmartFactory-EU.